You’ve seen tracking before on television, and if you’re reading this, then it’s likely you’ve also used tracking in a live broadcast sports event. Tracking is used to deliver information, such as team logos, the score or advertising, to viewers from the playing field or its boundaries. Tracking has applications across almost any sporting event, and it’s been shown to enhance the spectator experience, increase viewer engagement and, not immaterially, increase incremental revenues for the host broadcaster.

So, what are the five types of tracking and which is now considered the superior technology from a technical, workflow, and potential revenue-generating standpoint?

1 MOTION TRACKING. This is as basic as it gets. This method of tracking, simply takes the video information and tries to determine which way the camera that’s producing the image is moving. However, as you might expect there are inherent basic limitations. Motion Tracking can be confused by elements that move against the video, or large objects moving in the opposite direction of a pan.

2 ANCHOR TRACKING. While not technically a different method of tracking, it is sometimes referred to as motion tracking with anchor recognition. When a video feed recognizes a predetermined location in the frame, any graphics related to this location will be placed in a position as defined earlier by the operator.

3 PITCH TRACKING. This is a common method used in and around sporting venues. A Pitch Tracking system gathers both the pitch curvature and creates a lens distortion map based on a preset selection of images. The system will follow these lines throughout the match, and when lines are lost from view, it will seamlessly switch over to Motion Tracking. The significant advantage of Pitch Tracking is that because cameras can “see” the lines, the system has an understanding of three-dimensional space and can start to extract metrics from the video. 4 INSTRUMENTED TRACKING. Instrumented Tracking can be used to describe any form of virtual camera system that requires additional hardware. This includes hybrid optical and sensor based systems.

This is the standard method of tracking used in studio environments. Instrumented Tracking tends to allow more freedom of movement and it is seen as the most stable and reliable method of camera tracking, it comes at a cost in terms of additional hardware overhead.

5 SCENE TRACKING. This is the latest method of optical tracking that’s been created by ChyronHego, and is part of the updates in Virtual Placement 7.0, which made its debut at NAB 2017. The system is unique as it's able to gather metrics without using pitch lines or sensors.

The big advantage of Virtual Placement Scene Tracking is that the system is scalable — you don't need encoders or anything attached to the camera head or its lens to produce a virtual graphic that is actually in the scene, instead of on top of the image. 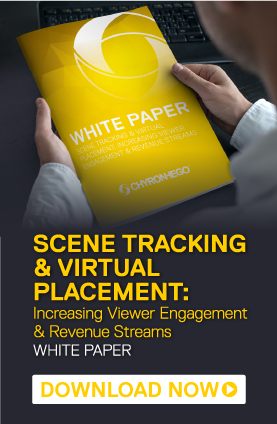