It should be obvious that bottom-of-the-screen tickers contain real estate that could be sold in the form of a sponsorship. In fact, most stations have ticker sponsors, but in general they don't maximize their sponsorship programs.

One reason is that ticker sponsorships during newscasts might not sit well with News Directors as it might "demean" the news. For the most part, News Directors might not like having sponsors in the viewers’ face throughout the entire newscast. The solution to this is simple, but also comes at a price — only run sponsorships when triggered. In this scenario, the ticker runs without a sponsorship, then the sponsorship is triggered and covers up the ticker, then after 10 seconds or so the sponsorship goes away and the clean ticker returns. This would mean less revenue, but is a good compromise if needed. Another option would be to sell short "time and temperature" sponsorships outside of the newscast proper, perhaps just before the top of the hour or during your local newscast teases. Sponsorship real estate can also be used for snipes, bugs, legal IDs, and other in-house purposes. Additionally, ticker real estate could make use of a social media module to take in and moderate Twitter feeds, such as for a local station's pre-game show.

ChyronHego, with its long history of delivering on-screen graphics, can assist stations to help viewers recognize and separate news from ads. Channel Branding gives stations the ability to add a promotional message tag to accompany the logo, allowing these stations to demand a premium for ticker buys. This gives the sponsor brand recognition plus a sponsorship message. For example, "Buy 3 Tires, Get 1 Free". As a caveat, stations need to make sure that their designer helps viewers differentiate between news content and paid/ad content. This can be as simple as paid content having a different color scheme than news content.

The 4 corners of channel branding. What to consider now, next and later.

Keeping busy with the PRIME Ecosystem. 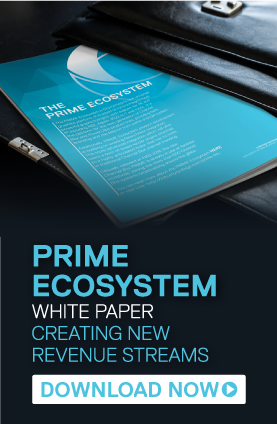