Find me on:
LinkedIn

The buzzword Big Data is normally used to describe a massive volume of structured or unstructured data. Big Data may be analysed to reveal patterns, trends, and associations, especially relating to human behavior and interactions.

TRACAB™ optical tracking technology tracks the movement of every player, the officials and the ball 25 times per second. Taking Football (Soccer) as an example, over 3.51 million data points per game are created!

Football (Soccer), the world's largest sport, is only one of the sports ChyronHego works with on a daily basis. When you include recent additions to the list of TRACAB-supported sports, such as Cricket, Rugby and Baseball, we're now tracking thousands of games every year.

5,203 games equals 18,262,500,000 data points per year. Following a strict definition, even this lofty number might not meet "Big Data" standards. But If you decided to print it all on paper, I suggest you think twice before hitting the Print button. You might find it challenging to locate enough space for the 8 kilometers (5 miles) high stack of paper.

We love data, the bigger the better, and luckily today there are a few other ways of storing data - other than paper!

Welcome to the Statcast™ Era:
https://sports.vice.com/en_us/article/the-revolution-will-be-meticulously-tracked-welcome-to-the-statcast-era

Who's the fastest player in the EPL?
http://www.foxsports.com.au/football/premier-league/who-is-the-fastest-premier-league-player-tracking-data-tells-us/story-e6frf4a3-1227532153221

PLAYER TRACKING IS USED BY THE WORLDS LEADING SOCCER LEAGUES 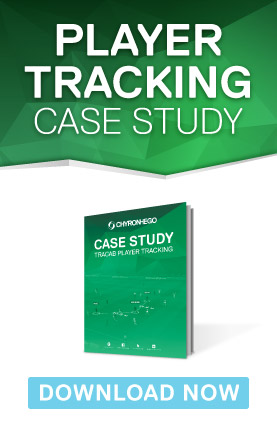