Every year, Swedes gather around their TV’s to watch the country’s most popular show, Melodifestivalen, an annual song competition that airs in six shows by Sweden’s Public TV Broadcaster, SVT. The winner of the grand finale is selected to represent Sweden in the international Eurovision Song Contest – the world’s biggest music show and the most popular entertainment program in Swedish TV history.

In 2016, SVT rebranded Melodifestivalen, giving the show a fresh, new graphics look. They turned to long-term partner ChyronHego for the implementation of the new graphics package. ChyronHego also provided SVT with both technical resources and staff. ”Graphics are an incredibly important component of a big production such as Melodifestivalen. Seeing this important project through from start to finish and being able to influence the look and functions of the graphics was a fantastic experience,” said Lotta Mallander, Graphics Producer & Project Manager at ChyronHego.

Read the full case study to learn more about how advanced live graphics from ChyronHego helped SVT create a compelling visual TV production for their millions of viewers. 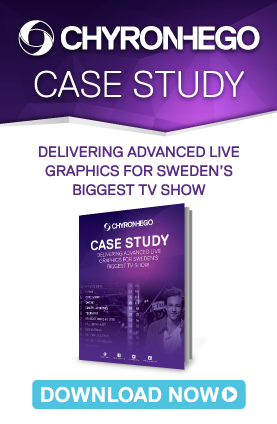