How Harvey made Hurricane History

As the Northern Atlantic and Pacific Tropical Storm season was peaking, the North Western Atlantic was experiencing fully what fury the tropical weather can bring. Just a week after Harvey made Hurricane History in Houston, Hurricane Irma was barreling down on the Caribbean, bringing destruction and devastation on the small nations of the Lesser Antilles, Barbuda, Puerto Rico, the Dominican Republic, and Haiti.

What many are asking is whether the recent storms are results of global warming or if this current hurricane season with higher than average activity is a deviation that should be expected. The fact of the matter is that one can not chalk the current season up to specifically having global warming as a cause, and analysts will debate whether the number of storms in a season can be used as an indicator by itself. Arguments are also being made that a better indicator would be the number of storms of Category 4 or higher, yet other arguments are being made that an entirely different form of indicator might be needed. The reason is this: The devastation being brought by a storm is not necessarily proportional to the category. In fact, most hurricane impact on land is in the form of a water event that is caused by torrential rains and storm surge.

As “weather aware” people, let us spend a moment in post-storm analysis. Although stronger than average, Hurricane Harvey is a classic example of how a strong storm in terms of wind speeds (it did indeed make landfall as a category 4 hurricane, the first in 13 years) caused nothing short of catastrophic damages for the communities around Houston, Texas, not primarily because of the wind, but because of water. The devastation was more than 90% caused by water, by means of rainfall and storm surge. This percentage number will likely even be higher as long term effect assessment continues.

Predicting the impact of the tropical cyclone (storm or hurricane) is more a question of accurately predicting all the effects of the storm where the wind speed, which gives us the categorization, is only one of the factors. What caused Harvey to really make Hurricane History was the fact that the storm lingered over the coast (as depicted in the Metacast graphics on the left) for days, and then looped back out to sea to make a second landfall a few hours later. The amount of time that the storm lingers over the coastline and the amount of precipitable water that is contained in the atmosphere around the storm, is what causes the tormenting of the municipalities and destruction and devastation.

It is imperative to have the means to analyze (in real time and in high resolution) the forecast models and the remote sensing data (radar and satellite in particular), which is present to fuel the rainfall event from a storm. Those who follow the ChyronHego Metacast Twitter feed will have read our reports on the development of the tropical storms in the Northern Atlantic. The Metacast graphic below shows the forecasted paths of Maria and Lee superimposed on the satellite image, and in the ocean between Northern Bahamas and Bermuda, Hurricane Jose is still spinning. This was only one week after Irma hit Florida, and another week after Harvey.

Recent surveys show that a majority of the population thinks that climate change causes hurricanes to be more intense. And, although that is of some importance, what really matters is what science says. Global environmental scientists overwhelmingly view the climate change as a contributing factor in making tropical weather more violent. And it is more important that people think and believe what the scientists present rather than what a majority of people think. The weather does not care what people think. We need to care about what the weather is doing to us.

The European Center for Medium Range Weather Forecast (ECMWF) and the US National Hurricane Center (NHC) did predict the 2017 hurricane season to be slightly more active than normal. And the scientists were right. They have also predicted that the damages to people and property will just increase over the next decades as a result of more violent weather, but also as an effect of where people live. A large proportion of the global population lives near the ocean, and there are entire countries that are in risk of being permanently flooded if the ocean water rises – one of the potential effects of climate change.

ChyronHego and its Metacast team continuously examine ways to display data that can make storytelling possible and better. We believe that more data, more data sources, and more flexibility in the data provision ultimately gives broadcasters more flexibility in telling the right story, whatever the weather. Better access to data also gives a lower cost of operation and brings the on-air meteorologists and the viewers higher value. ChyronHego's Metacast team stays on top of global data supply, and sourcing the right data from the source that makes most sense in any geographic, has been our mode of operation for almost 25 years. That is what we do. 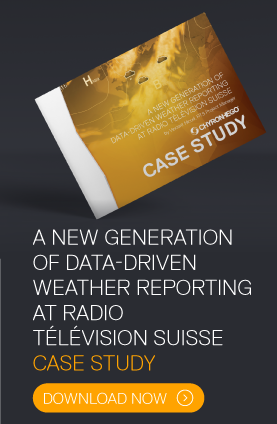